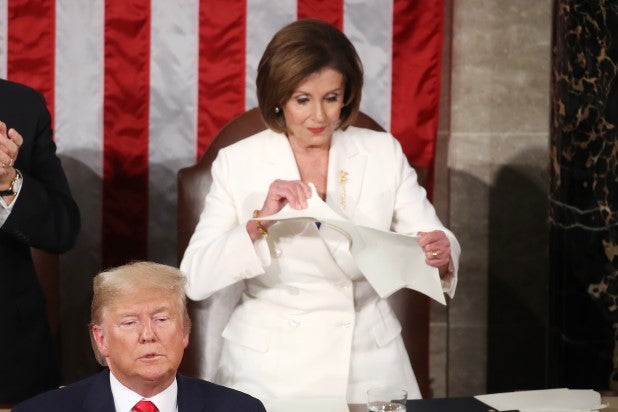 Speaker of the House Nancy Pelosi tore up the advance copy of President Donald Trump’s State of the Union address after the president finished speaking Tuesday night. The move came after Trump did not shake her outstretched hand at the beginning of the address.

Pelosi and Vice President Pence (who also serves as the president of the Senate) stood behind Trump while he made his address. After he finished, Pence clapped as Trump nodded and conversed with nearby audience members, but Pelosi made quick work of shredding the copy of the speech before her.

After receiving that copy of the speech at the beginning of the night’s proceedings, Pelosi extended her hand. Trump did not shake it, but he was already turning to face Congress and may have not seen her gesture. It’s worth noting Trump did not shake Pence’s hand either.

Also Read:Here’s What Democratic Legislators Chanted During the State of the Union Address

During the address, Pelosi seemed to visibly react to Trump’s comments about her home state of California, and at times appeared to mouth messages to Democrats to maintain order.

The speech-ripping moment lit up Twitter almost immediately. On the left, some praised her, like Charlotte Clymer of the Human Rights Campaign, who called her a “hero” and a “legend.” On the right, Pelosi was vilified. Radio host Michael Savage declared she had melted down in front of the world.

When asked why she ripped up the speech, Pelosi told Fox News, “Because it was the courteous thing to do considering the alternatives.”

The White House issued a statement after the address, stating, “For such a really big night, she sure behaved pretty small.”

The media seemed surprised by Pelosi’s actions as well.

NBC News’ Lester Holt called it a “stunning moment” while colleague Chuck Todd mused instead on the contents of the ripped paper: “It’s so far removed from a traditional state of the Union at this point … It’ s just timing that we’re calling it a State of the Union. This was a conservative campaign checklist of making sure you hit every special interest group.”

Over on Fox News, Martha MacCallum reacted simply by saying, “That is something.” Co-anchor Bret Baier noted he thought there was “an element of rage” in Pelosi’s action.

This isn’t Pelosi’s first time creating a GIF-able, viral moment during the State of the Union. Last year, she infamously clapped in Trump’s face, wearing an expression that launched a thousand memes.

She didn’t do everything the same as previous years, though. The Speaker of the House typically starts the evening saying, “I have the high privilege and distinct honor of presenting to you the President of the United States.”

Instead, this year, Pelosi gave an abridged introduction: “Members of Congress, the President of the United States.” 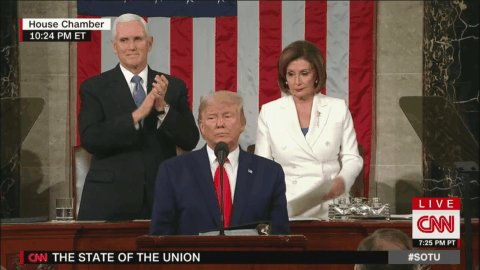 I wonder how the whites successfully convinced the Africans that polygamy is a sin but gay is a right?
Fake News Awards - CNN crowned winners
22 MOST INTERESTING MUGABE WISDOM TO ACTIVATE YOUR BRAIN
Nancy Pelosi silences applause after Trump impeachment vote
Seer 1 facing arrest for election meddling and death threats on Zambian gov't officials
The killing and persecution of Christians in Nigeria must stop – Trump (video)
Trump fled to bunker as protests over George Floyd raged outside White House
KENYAN PARLIAMENT VOTES TO REMOVE POCKETS FROM POLICE UNIFORM SO THEY CONCENTRATE ON THEIR JOB
Video of Desmond Elliot “calling for social media regulation” finally leaks
Why Trump Will Resign in 2020
Nigerian embassy suspends staff for choppin woman in exchange for passport renewal
DONALD TRUMP’S SPEECH ON WHY HE HATES AFRICANS AND ARABS
Trump Tests Negative for Covid-19 on Consecutive Days, White House Physician Says
Buhari is running a terrorism-friendly regime, He shares the same Ideology with Terrorists – Ogbu
ANC wants SA to intervene in US riots after George Floyd's death
Prophet Bushiri's Prophecy on Elections in Malawi comes to pass
Bushiri Escape in Jet, Ramaphosa and Chakwera Involvement Explained by Malawi Minister
PRESIDENT OF UNITED STATES DONALD J TRUMP IMPEACHED BY ANGRY DEMOCRATS IN CONGRESS
Bushiri Malawi Election Prophecy Confirmation
"John Bolton is a shameless backstabber and a traitor", Rudy Giuliani
Man who has been in government 50 years promises to fix things
President Chakwera won't hand over Prophet Bushiri to South Africa | Matters in the hands of the Law
Share this...

Buhari is running a terrorism-friendly regime, He shares the same Ideology with Terrorists – Ogbu

22 MOST INTERESTING MUGABE WISDOM TO ACTIVATE YOUR BRAIN

Our Men Are F9ck!ng Us Too Much” – Ghanaian Women Begs President To End The Lockdown

Lady said to be too sexy for Kenya’s police

Man dies of ‘sexual sweetness’: Malawi Police say prostitute committed no crime for being too sweet